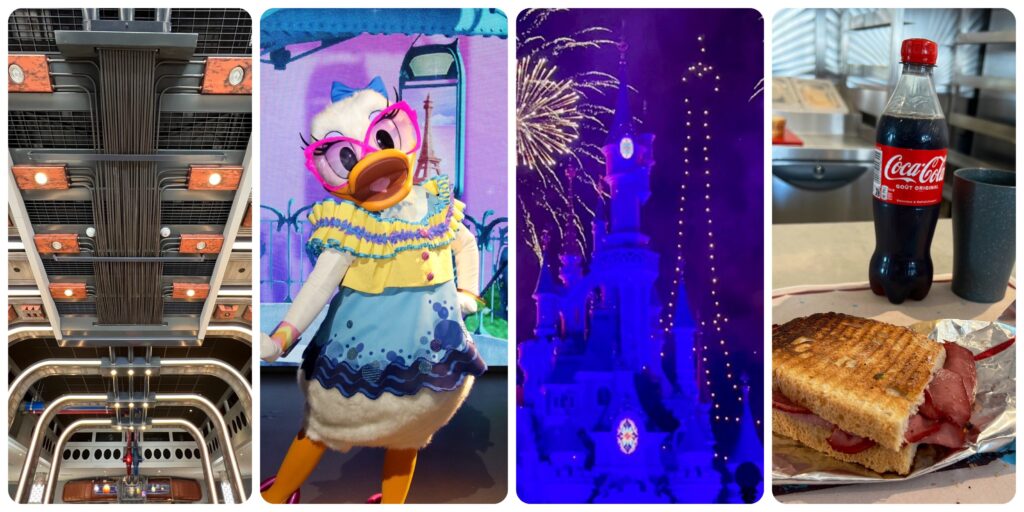 We are back with a new edition of our weekly photo report after last week’s special Avengers Campus opening report (which you can read HERE!). This week, Avengers Campus is still the star as we look into additional offerings and details of the land. But we also cover refurbishments, characters and more!

While we covered a ton of details in last week’s article, there are still some offerings that are being unveiled and details to be found. Let’s take a look!

Disney shared these great photos of some of the celebrities who attended last weekend’s media event, including Brie Larson (aka Captain Marvel), Pom Klemtieff (aka Mantis), Iman Vellani (aka Kamala Khan), and The Black Eyed Peas.

And of course if the Disney executives Natacha Rafalski and Bob Chapek.

This week, the Portal Shop opened! It’s technically not fully inside the land, more on the edge and sells WEB merchandise, Campus equipment and cold drinks. It’s very well designed!

We went back to PYM Kitchen for a full meal this week. The location has some really cool items for the table from the plate to the drinks clipboard and the fun placemats.

The entrance shines with a great level of details. The dining room also has some fun details but not nearly as much and is missing the pretzel enlarging conveyer belt, replaced by screens.

Another unique details however are the particule pipes that actually connect to ports inside the restaurant.

Food wise we tried a lot of the “big and small” options: hot dogs, burgers, pasta. Everything is quality and definitely varied and fun. The desserts shine in particular the Oreo cake and giant madeleine.

The art inside PYM Kitchen is wacky and fun with a giant asparagus Eiffel Tower, giant chicken, carrots etc..

The Super Diner opened towards the end of the week. The location which used to be Cafe des Cascadeurs no longer serves burgers but instead freshly made and grilled Rueben sandwiches. They were pretty nice, with a lot of meat for €11 before discounts. For dessert, the Choc-tastic bar is a brownie base with caramel mousse and peanut butter for €5. It’s good as well! The interior space has been refurbished and guests are able to dine inside.

Don’t miss the fun photos of the owner of this food truck on the side of the vehicle. She’s actually Imagineering hero Beth Clapperton who has been one of the creative leads of the entire project!

Disney has released HD menus for the 5 food locations of the land. All the details are above!

Make sure to look up on the shop’s shelves for old props from Armageddon: Les Effets Spéciaux!

Guests can now buy the map of the Avengers Campus in blueprint format. The map is huge and comes in a top secret envelope with fun references like Colonel J Mauro for John Mauro – Imagineer on both Avengers Campus projects. It’s €12 and worth every penny.

If you’re visiting during AP Previews (until July 19), note that the shop is exit only so you can only access it after riding Spider-Man W.E.B. Adventure. Also note that AP discounts do not apply to land-specific merchandise aka almost everything in the shop. This restriction will be in place until the end of the opening “period” which could be in September.

On Monday we got to try the new virtual queue system in place for the Training Center. It’s pretty straightforward as long as you know you have to book. Guests have to have scanned their park ticket before entering and can only currently go train once per day.

Spider-Man was the coolest this week, appearing here, there, everywhere! On top of the “Signal Tower”, on the W.E.B building balconies and of course the roof. The entire building is really well thought out and every inch is used for showcasing the heroes.

At the Training Center, make sure to interact with Spidey! He may show you some of the cool items in his training room, like the very first Spider-Bot he made!

The ADV or “Avengers Deployment Vehicle”’was parked at the land’s entrance so we got a closer look. It’s really well made bath from a look point of view but also for the heroes to jump on and off. The front features a screen animation which adds to the futuristic look.

Avengers Campus continues to preview this coming week for AP Holders (until July 19) before opening to everyone on July 20. Next week on our report we will cover the official opening day celebrations.

Disneyland Paris completely revamped the Bastille Day celebrations this year with a brand new show that included fireworks, drones and more effects! It paid hommage to France via Disney classics from Walt Disney Animation to Pixar. The drones were a particularly stunning addition and wow’ed the Guests with several design: a flag, stained glass and Eiffel Tower.

You can watch the entire show in 4K with our full video right here:

Main Street Station was lit in blue white and red for the occasion, a nice touch!

But that’s not all – Mickey and Minnie also appeared after the show in French inspired outfits. All around a great offering for this national holiday. Bravo!

And just like that, Daisy got a new outfit for her “Day in Paris”! She is alternating with Minnie at the Studio Theater. Two more of Minnie’s friends are also on the way: Clarabelle and Clarice!

Goofy also debuted a new outfit this week as he joined the crew of Disney Newport Bay Club! Guests staying at the hotel can meet Goofy from about half seven on select nights, until late.

We start in the Resort Hub where the new stretch of security gates is nearing completion. The new welcome sign has also been completed with Mickey sitting on top of it ! Paving was added on the front end and I hope the entire plaza will eventually be repaved. These gates are expected to open next week so we will report in the next article if that’s the case.

The Champagne cart is back on Main Street! Sadly the themed DLP30 glasses are no longer but a glass is still €15. It seems they have switched the Champagne for a more “generic” one as well.

With Avengers Campus complete, the next frontier is now the Walt Disney Studios Park “lake area” expansion including Frozen Land! Two large cranes are now working on the project and we can already see a lot of details of the future bay, marina and bridge. There is no official timeframe for the land but we hope it could open in 2025.

And finally at the Disneyland Hotel, we took a look from the sky at the main entrance area. The Porte Cochère has been completely stripped out, and work is also in progress on the roofs facing that side. There is no official timeline for the reopening of the property with its Royal theme but we’re expecting sometime in 2024.

And that’s our roundup of the news for this week. What an exciting time to be a Disneyland Paris Guest! Join us again next week as we look at the official opening day of Avengers Campus and more !