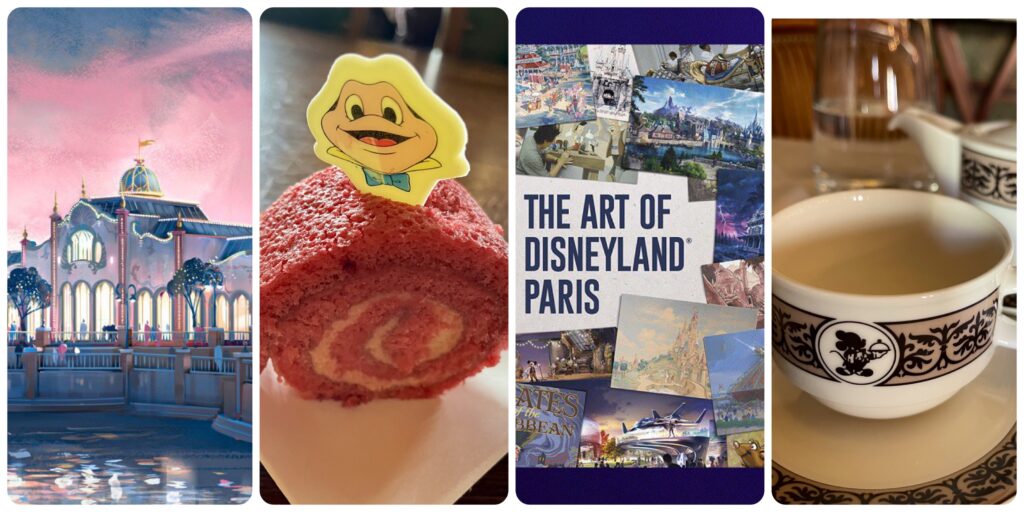 Welcome back to our weekly report! Some big Walt Disney Studios expansion news this week with the reveal of a new restaurant… and even more restaurant news with the reopening of two favorites. We also look at merchandise, Avengers Campus and more!

Well I did not expect to have a section on the Walt Disney Studios Expansion this week yet here we are! Out of nowhere, Disney enveloped concept art for a new restaurant to be built along the shores of the future Walt Disney Studios lake. With Art Nouveau inspirations, the new flagship restaurant will seat 250 guests and feature yet to be announced characters. The art also revealed more details about the vision for the lake with a look at lampposts, landscaping and viewing areas.

Disney also revealed that the restaurant will be park of the “promenade” section that will link up the old Walt Disney Studios to the new lake area with an avenue of themed landscaped gardens that will include an “outdoor family attraction” (read flat ride or carrousel), additional water features, a kiosk and small outdoor theater seating area and more. Lots to look forward to!

Above you can see in red the area there the restaurant will be built, with the arrow pointing in the direction of the concept art view. The mal also show the location of the upcoming Frozen land which will include the ice palace on top of the north mountain (the show building for the attraction), the town of Arendelle, the Arendelle Castle (meet and greet) and a Nordic inspired quick service restaurant.

Disney released this on site image of the construction – as you can see we are waayyyy off from walking into Arendelle, but always good news to hear that things are underway.

Two iconic restaurants reopened this week. Let’s start with Walt’s the Club 33 inspired location. The menu was updated and is surprisingly reasonable:

We got a change to dine there during the soft opening and try some of the dishes. The food is good although portions are on the smaller side.

The chili is “deconstructed” which is definitely a choice but why not. Nice to see the updated down pin apple cake.

Guests who dine at Walt’s have the option to buy a €16 exclusive pin.

And as part of the reopening, dishes with the 1992 design were re-issued. A great idea, they are really lovely and fancy!

Another icon has reopened its door this week: Toad Hall! We almost had given up on seeing this location open yet here we are!

Both reopening are most welcomed additions and while not perfect , the food was better than we would have expected, a good sign for the future of the dining options at Disneyland Paris.

A whole section on DLP30 merchandise again this week but some some really my exciting new items announced ! A new book “The Art of Disneyland Paris” will be released in the next few weeks. It features a lot of concept art and stories about the design of the Resort. Really looking forward to get our hands on this one !

Also coming up, this time for April 12: an exclusive anniversary day t-shirt, Pandora charms and a chocolate bar with a special contest inside the wrapper to win Disneyland Paris prizes.

As well as the large Mickey figurine. There are LEDs inside the hat so it lights up.

More items from the “urban” “best day ever” collection also arrived (see above, personally not a fan).

As well as more items from the main collection: pens, lithography, a watch, an LED spinner.

Our friends at Arribas released this lovely glass name tag for €49. You can get your name engraved on it for €5.

At The Storybook Store, the AP team organized a new exclusive sale for members : the Mickey Moise – The Main Attraction collection themed to The Mad Hatter.

Members could also buy this original Wild West Show target for €249. Why not. Maybe can be turned into a coffee table!

We start at Avengers Campus where the “Studio 8” and “Studio 9” signs have been removed, revealing their true purpose: mobile networks antennas ! This is likely the first Sep towards installing the large “A” seen on the latest concept art.

Nearby at the Spider-Man building, tests are in progress on the crane that could be used by Spider-Man. The Stuntronic has not been confirmed for Paris… just like the opening date. Preparations are also underway behind the Quinjet for the large tarp that will hide the former Moteurs Action set from the Land.

This week we also started saying goodbye to the Production Courtyard stage. It has hosted many shows from Star Wars to Marvel and of course Christmas and Surprise Mickey but it’s time to go as the opening of Avengers Campus approches and the placemaking of the entire park progresses.

Still on Production Courtyard, the Marvel posters have been removed at Studio Theater, suggesting this offering will soon close.

Moving over to Disneyland Park, the big news in refurbishments this week is that the Discoveryland entrance sign is back and IT SPINS!! Fantastic!

In Frontierland, we welcomed back The Molly Brown from refurbishment..

And the Frontierland to Main Street passage fully reopened as the decking work at The Lucky Nugget was completed.

And in Adventureland, the Cabane des Robinson refurbishment received this nicely themed sign.

What an array of eclectic news this week! Thank you for reading as always and I will see you back here next week to discuss April 12, the anniversary day of Disneyland Paris, plus all our usual topics. Have a great week!

Hi,
Could you give some updates on the progress of all the repaving works please? It has been a while. 😉