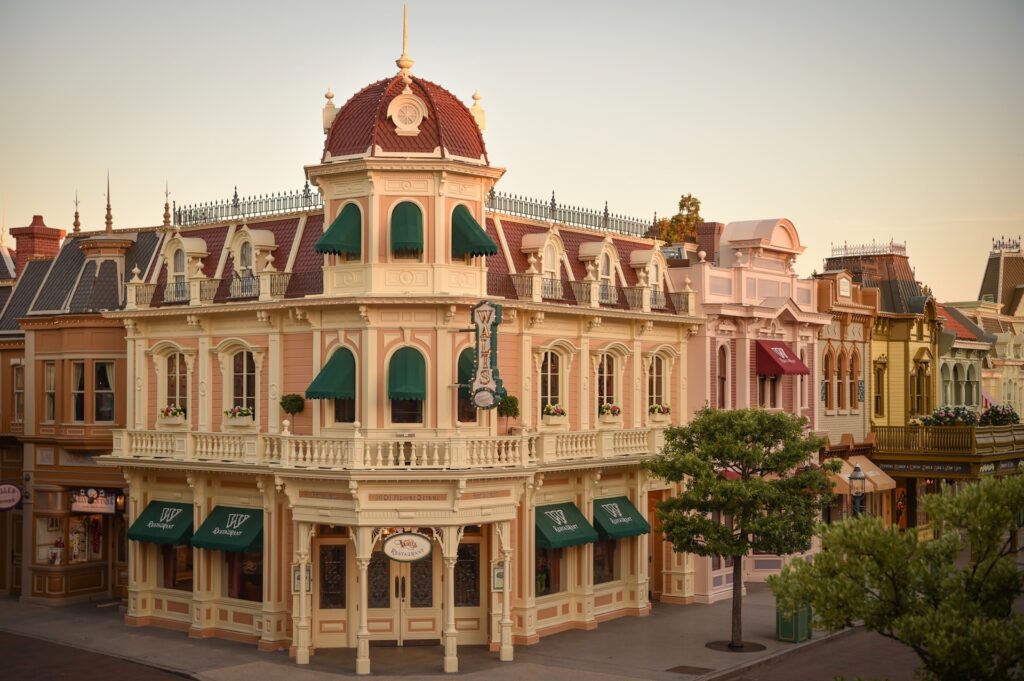 Among the quality restaurants that Disneyland Paris has, the Walt’s – an American Restaurant is a not-to-be-missed location, both due to its refined dishes and its history. Its reopening – as part of our 30th Anniversary – is an opportunity to explore this iconic place again… in greater detail!

A Journey Through Walt Disney’s Story

Its location – and obviously its cuisine – are legendary. But the Walt’s is not only one of the best restaurants on the small turn-of-the-century street. It also pays an incredible tribute to Walt Disney, as it is filled with countless memories.
The story starts as soon as we get close to the building. With its beautiful façade, which was painted in yellow and white – with touches of green – you cannot miss it. While it is centrally located on Main Street, U.S.A., and extends along the street to the North, its entrance is located on Flower Street – the pathway that leads to Liberty Court, on the west side – and more precisely at number 1401. This address is not only that of the Walt’s. It also refers to that of the Walt Disney Imagineering headquarters in Glendale, California, where all international Disney Parks have been designed since 1961.

Once you are inside, you can only be impressed with the charm and the refined style of the place. The furniture and other wooden decoration elements add depth and warmth to the space, starting with a bust of Walt, that warmly welcomes Guests by the stairs.

The lobby definitely takes us back to his roots. The room contains various photos of the Park founder’s family, including his parents, his brother Roy, and of course his wife Lillian. Nearby the piano, the zoetrope – an optical device that preceded animated films – reminds us that Walt never ceased to revolutionize the movie industry throughout his career. Besides, several photos with Mickey clearly show his achievements in this field.

As for the cage installed on the table, it is a nod to the mechanical bird that drew his attention in 1949, during a trip to New Orleans. He brought it to his engineers so they could understand and reproduce its mechanism. This was the beginning of the creation of audio animatronic characters, which brought a third dimension to the art of animation and have been installed in large numbers in such iconic attractions as Pirates of the Caribbean, Phantom Manor and La Tanière du Dragon.

We can access the second floor by taking either the stairs, with their multiple photos that depict Walt’s most successful moments and truly reflect his incredible career progression, or the elevator – a key element of the lobby – with its structure made up of mahogany, topped by a finely crafted glass dome. In addition, Walt’s interlaced initials – the design of which is inspired by that initially developed for the wrought iron balustrade of his apartment in New Orleans Square, at Disneyland in California – are engraved on the window glasses. They were also added onto other decorative elements installed in the room, especially on the counter, at the entrance of the restaurant.

A One-of-a-Kind Visit to Disneyland Paris

The second floor of the Walt’s is partly inspired by the famous Club 33. But unlike the private restaurant located in New Orleans Square in Disneyland, designer Eddie Sotto wanted to create a place that is both stylish and authentic, and open to all Guests visiting Disneyland Paris so they can watch the parade while enjoying tasty meals.


Once they are upstairs, Guests can discover an authentic small apartment made up of a reception hall and six dining rooms. Imagineers did a lot of research to find out what interior decoration looked like in the past, so as to best reproduce the style of a turn-of-the-century home, whether it be through the use of “lincrusta”, an embossed wallcovering invented in 1877 or “anaglypta”, a textured wallpaper designed 10 years later.

The different rooms were designed based on the themes of the Lands of Disneyland Paris, as if they were seen through the eyes of an architect from the Victorian era. Therefore, the style of the Adventureland room is strongly influenced by the orientalism movement of the late 19th century, the Fantasyland one is inspired by the neo-gothic style, the Frontierland one is a nod to the work of American artist Frederic Sackrider Remington, who is famous for his bronze sculptures portraying scenes from the Old West. The dining room that honors Discoveryland pays tribute to the Art Nouveau work of Alphonse Mucha and Hector Guimard, and Jules Verne’s novel, as revisited by Walt Disney. In this room, the fitted carpet’s patterns – which are reminiscent of the ocean – are in perfect harmony with the ceiling’s celestial arabesques, adapted to reflect the Art Nouveau style. The fireplace is a masterpiece in itself. It was designed by Eddie Scotto, who drew his inspiration from that which was imagined by Alphonse Mucha for the Fouquet jewelry store, and which is now installed at the Carnavalet Museum in Paris. Carved in walnut tree wood from the Amazon rainforest, it is topped by a stylized armillary sphere (a model of the celestial sphere) that is reminiscent of the novel From the Earth to the Moon, in which a scale model of the Nautilus designed by Tom Sherman – the art director of the attraction Les Mystères du Nautilus – is suspended.

As for the last dining room on the second floor, it is a nod to Disney Hotels. It notably reflects one of the initial concepts of the Disneyland Hotel, the façade of which is inspired by the famous hotel Del Coronado, which was built in 1888 near San Diego.
The decoration also includes several scale models of attractions, which were directly designed in Walt Disney Imagineering workshops during the creation of Disneyland Paris.

The restaurant’s background music includes such classic songs as “The Ballad of Davy Crockett” and “it’s a small world”, not to mention Cinderella songs, played alternately on a piano and by a chamber orchestra, in a ragtime style. Therefore, Eddie Sotto wanted to create an intimate and warm atmosphere – which is typical of that era – through Disney’s musical history.

Back to the Roots

But the Walt’s has not always looked like this. In the beginning, it had three extra rooms on the first floor, in addition to an outdoor terrace on Flower Street. Two of them were interconnected, on the left-hand side of the elevator. One of them paid tribute to Walt’s passion for trains, through numerous personal memories, including photos of the miniature model he had built in his home. As for the other room, it contained sketches related to the creation of Main Street, U.S.A., some of them were drawn by legendary Imagineer Herb Ryman, who was one of the persons who designed the original version of this famous street for Disneyland in California. We could also see a beautiful scale model of the Main Street Transportation Company building.
The room located on the right-hand side, behind the staircase – which extends along Main Street, U.S.A. – showed Walt Disney’s bond with Europe, especially as he worked as a Red Cross ambulance driver after the 1st World War. It also contained numerous memories of his trips with his wife Lillian, such as a famous photo of their visit to “Disney Street” in London in 1965.

Through the Walt’s, Eddie Sotto’s initial goal was to tell Walt’s personal story, starting on the first floor with memories of his youth spent with his family and in particular his wife, along with the creation of Main Street, U.S.A. Then, the staircase, over which photos of his achievements were displayed, led to the second floor and the construction of Disneyland Paris.

In 1999, the rooms downstairs were redesigned and combined to create Lilly’s Boutique, that truly honors Walt’s wife right next to the restaurant that pays tribute to her husband – which is truly symbolic! Built over that period, it is the original fireplace that still sits next to the shop’s entrance.

But a visit to the Walt’s – an American Restaurant would not be complete without a culinary nod to France. For the 30th Anniversary of Disneyland Paris, the resort’s chefs have imagined a brand-new bistronomy menu of refined American signature courses with a French touch, inspired by the cities of Chicago and Marceline, where Walt Disney was born and lived as a child. Some recipes have even been created around the famous Isigny cream, as a nod to the Norman origin of the name Disney.

This is a perfect combination between historical culture and gastronomic pleasure!