“Took Them Long Enough” – The Retheming of Splash Mountain 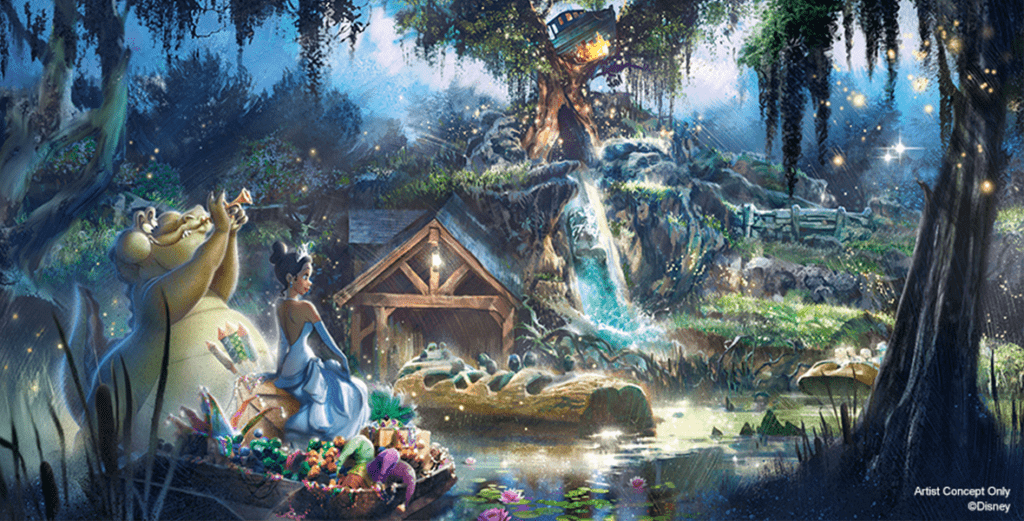 If you’ve been on the Disney side of social media today (or even just social media in general), you’ve probably heard the news. Disneyland Resort in California and the Walt Disney World Resort in Florida are retheming the classic Splash Mountain attraction. The ride will change to a Princess and the Frog themed log flume, keeping the actual ride the same but changing the theme.

According to the press release from Disney, Imagineers have been working on the retheming since 2019 (which to some seems unlikely). The new plot will take place after the “final kiss” from the movie and guests will follow Princess Tiana and Louis the alligator’s adventure to create the perfect Mardi Gras performance. To quote the announcement, Disney Imagineers are answering the question they ask themselves each time they retheme an attraction – “How can we build upon or elevate the experience and tell a fresh, relevant, story?”

The theming has come at a pivotal moment in American history. For those who are unfamiliar with the origins of the attraction, Splash Mountain is based on the movie Song of the South from 1946. The movie itself is based on the Uncle Remus stories from black American folktales. The film follows a young boy named Johnny who visits his grandmother’s plantation. During his time there he meets a worker named Uncle Remus, who tells tales of Br’er Rabbit, Br’er Fox, and Br’er Bear. One of the most famous songs in the film, “Zip-a-Dee-Doo-Dah”, even won an Academy Award for Best Original Song in 1948 and James Baskett, the man who plays Uncle Remus, was the first black male to receive an Oscar.

Many consider the movie to be stereotypical and racist toward African Americans. Even though the plot takes place in the Reformation after the Civil War, the topic of slavery is still an important part of the story. The National Association for the Advancement of Colored People (NAACP) acknowledged the artistic merit of Song of the South, but noted that “the production helps to perpetuate a dangerously glorified picture of slavery” and “gives the impression of an idyllic master-slave relationship which is a distortion of the facts”. To their credit, Disney has been trying to erase the controversial movie from its past, even going as far as keeping the film off of the Disney Plus streaming platform and never releasing it in home video format in America. But many believe that it has not been enough.

For some, the retheming is something that should have occurred years ago. Even though Splash Mountain focuses solely on the animal characters of Br’er Rabbit, Br’er Fox, and Br’er Bear, the film those characters come from has been outdated for decades, possibly even from the moment it was first released. While Disney has not made a profit from Song of the South itself in years, Splash Mountain merchandise like stuffed animals, pins, shirts, and Funko Pops have been bringing in money for years, allowing Disney to use the racist film to gain more funds.

This is not the first time a classic ride has been rethemed, and it certainly won’t be the last. There have been many times in which a “classic” ride has been turned into a ride with more Disney IP, also known as Disney’s “intellectual property”.  The Submarine Voyage in Disneyland was changed to the Finding Nemo Submarine Voyage, the Carousel of Progress became America Sings, California Screamin’ was transformed into the Incredicoaster in Disney’s California Adventure Park, and most recently, the Great Movie Ride in Hollywood Studios was converted to Mickey & Minnie’s Runaway Railway.  There have been some changes that haven’t been as effective as others, but many have brought new life into attractions that might have otherwise been abandoned.

The retheming actually fits quite well in Disneyland, as its location in Critter County is right next to New Orleans Square, the very place that Princess and the Frog is set in. Splash Mountain is in Frontierland in the Magic Kingdom, but there actually used to be a Princess Tiana show in Frontierland, Tiana’s Showboat Jubilee! in 2009 (the same year the movie was released). And besides, another princess-themed attraction has been long overdue in the Disney parks. Out of the hundreds of attractions throughout the American parks, only a few feature princesses – Snow White’s Scary Adventures, Ariel’s Undersea Adventure, Frozen Ever After, Enchanted Tales with Belle (along with some debatable ones like castle walk-throughs and singalong films). Now, one of the “Disney Mountains” will be dedicated to the story of a princess. Maybe we could even get a new A1000 Audio-Animatronic Princess Tiana (or Louis)!

Personally, I am thrilled with the decision. I had the chance to go on Splash Mountain at Disneyland back in 2019, and knowing the context of the theming, felt uncomfortable being on an attraction based on Song of the South. The main reason I had gone on the ride was to see the animatronics, especially the ones that had previously been in the America Sings attraction. While the ride itself was enjoyable, the theme could definitely be improved, and it will be with the first attraction featuring a black princess! I was surprised yet pleased to see how quickly the company took action. With all of the racially charged protests occurring across the United States, Disney has chosen to be on the right side of history by correcting its previous errors and choosing to no longer gain profit from a racist film.

Ultimately, Disney made the right decision in changing the theming of Splash Mountain to Princess and the Frog. While the original attraction can be considered one of the Disney classics, the theme parks must change with the times in order to reflect the world as it evolves. While many will miss the classic theme and humming along to “Zip-a-Dee-Doo-Dah” as they float by singing animatronics, the time has come for the attraction to be updated. Nothing can remain the same forever, not even the most iconic attractions. To quote the man himself, Walt Disney, “Disneyland will never be completed. It will continue to grow as long as there is imagination in the world.”