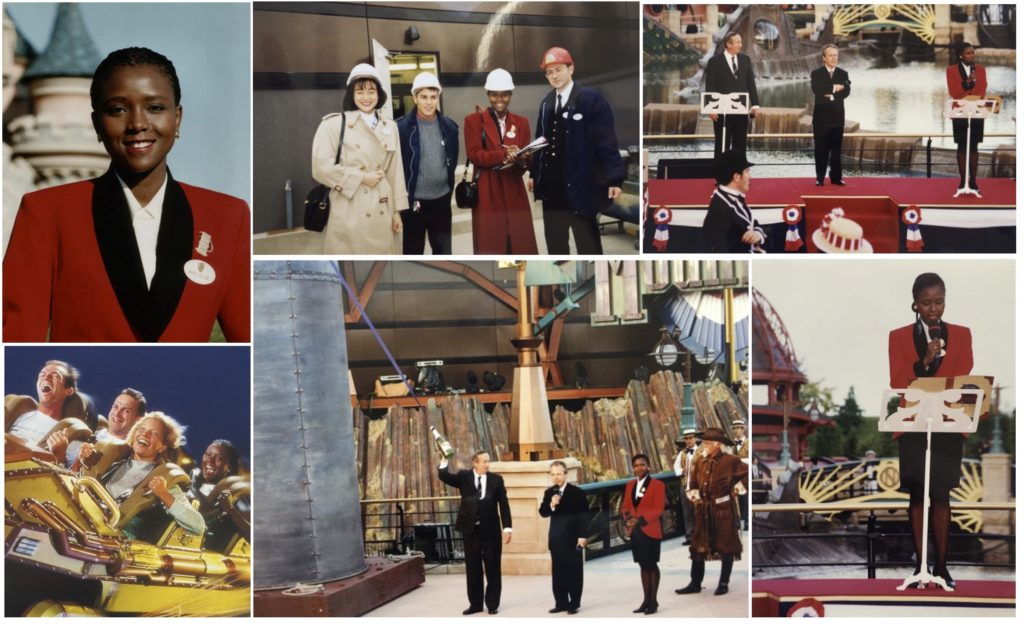 Marie-Hélène, you were the Ambassador at Disneyland Paris in 1995*, can you tell us about your experience in our destination?

My first time working in Disneyland Paris was in 1992, three months after it opened. I joined the Park Support Teams (Custodial) as part of a Management program. For a year, I worked at night and it was a very enriching experience! At night, the Park is ours, with its lights and no music, and we could watch the sun rise over the castle.

I applied to the Ambassador Program completely by chance as I hadn’t followed the process because I worked at night. At the time, I wanted to join the Disney University teams. So, I was the last candidate to send in my application. Being an Ambassador was an exceptional experience! I got to meet so many amazing Cast Members during various events. It also gave me the opportunity to get to know our company better, its history and its identity! I also traveled for events in France and abroad and most importantly it gave me the chance to be part of the preparations for the inauguration of the iconic attraction: Space Mountain – From the Earth to the Moon!

Can you tell us about how it was before Space Mountain in Disneyland Paris? Was it eagerly awaited?

I think it was the most important event three years after the opening of the Park. Every department came into action for months: from Walt Disney Imagineering to the Maintenance, and of course the Operations teams. Cast Members were very interested in the progress of this project. Everyone was waiting for the first tests as well as special Cast Member events to be able to ride the spaceships.

The Communications department and the Special Events department did a wonderful job, be it for internal or external uses. There had been numerous reporting, Imagineers interviews, etc.

It was a technological innovation at the time. What did it represent for Disneyland Paris?

With this brand-new attraction at the cutting-edge of technology in 1995, Disneyland Paris was opening a new chapter of its history. Space Mountain distinguished itself from other attraction with its size, its technological achievements with for instance its catapult, the onboard synchronized soundtrack and its special effects… It also felt like we were going at an astronomical speed! The decor, the music, we were traveling in a never seen before universe for an intense and exceptional journey.

The inauguration day was very special! How did it go for you? How do you remember it?

It was magical! The Entertainment teams, Special Events, Guest Relations as well as all the Cast Members were really looking forward to this day! Many celebrities, Press and guests were expected to be present and the show went beyond expectations. For the official ceremony, I had the honor of being on stage next to Roy Disney, Walt Disney’s nephew, and Philippe Bourguignon, then President of Disneyland Paris. We were all so proud and emotional: I could see stars in everybody’s eyes! And the magic happened, every guest couldn’t wait for their immediate boarding!

For me, that day was the height of my ambassador year and I wouldn’t have lived it as intensely if I hadn’t been in this role. It was like a wedding day: you wait for it for a very long time, and it passes way too fast!

What did you feel the first time you went on the attraction?

The first time was magical and breathtaking! I was bewildered, screaming, eyes wide open but shutting them very quickly because I so scared! I realized how lucky I was to be able to ride such an amazing attraction.

I had the opportunity to go on Space Mountain during a preview event with the press. I wouldn’t be able to say how many times I have been on it! But after a lot of journeys from the earth to the moon, I decided to stay put and wish a good trip to the visitors and wait at the exit!

I simply loved every different version! Each one is more innovative than the previous. But, because I got to be part of the inauguration of the first version, I have to say I am very fond of it! So, for me, it’s Space Mountain – From the Earth to the Moon.

A huge thank you to Marie-Hélène, Ambassador at Disneyland Paris in 1995, for sharing her unforgettable experience during the inauguration of Space Mountain – From the Earth to the Moon.

* Until 2006, the Ambassador Program in Disneyland Paris was made of only one Ambassador.