Saturday January 11 marked the start of the “Frozen Celebration” season at Disneyland Paris. While most of the offerings included in the season started way before (from last November to, well, 2017 if you trust the programme), “Frozen 2: An Enchanted Journey” is the real headliner here. Guests were quick to point out that one show cannot carry a season, but budget and marketing choices had to be made so let’s take a look at this new show! 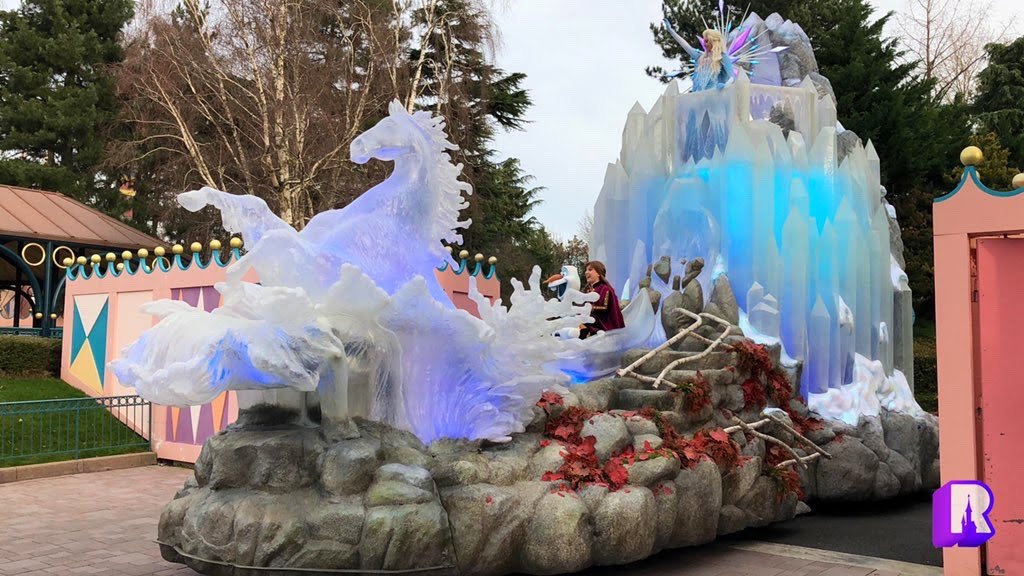 Based on the creative design of Scott Shaffer for “Magic Happens” Parade at Disneyland (Anaheim), the new nearly 6 meters high unit portrays iconic moments from Frozen 2. The front depicts the “Water Nokk” with an impressive translucent LED backlit statue (almost wish the show ran later to see it at night!). 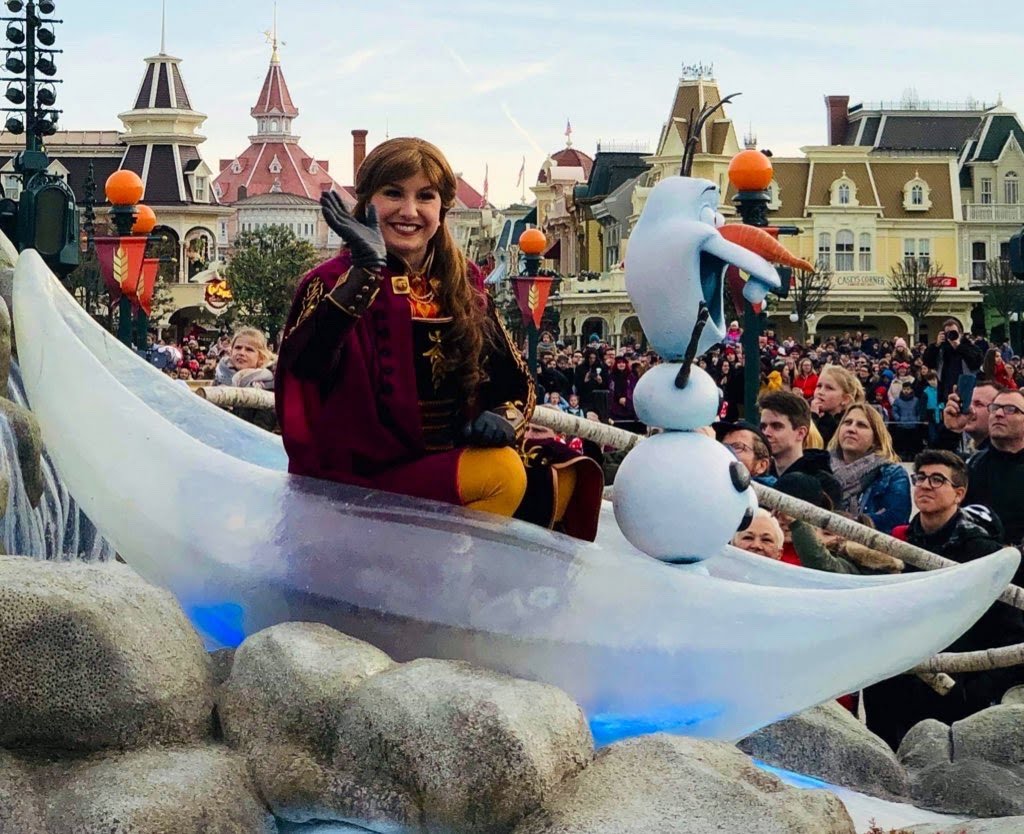 The middle section sees Anna and Olaf in their ice canoe – a really fun setup! At the back, Elsa towers over the structure on top of an ice mountain, naturally. 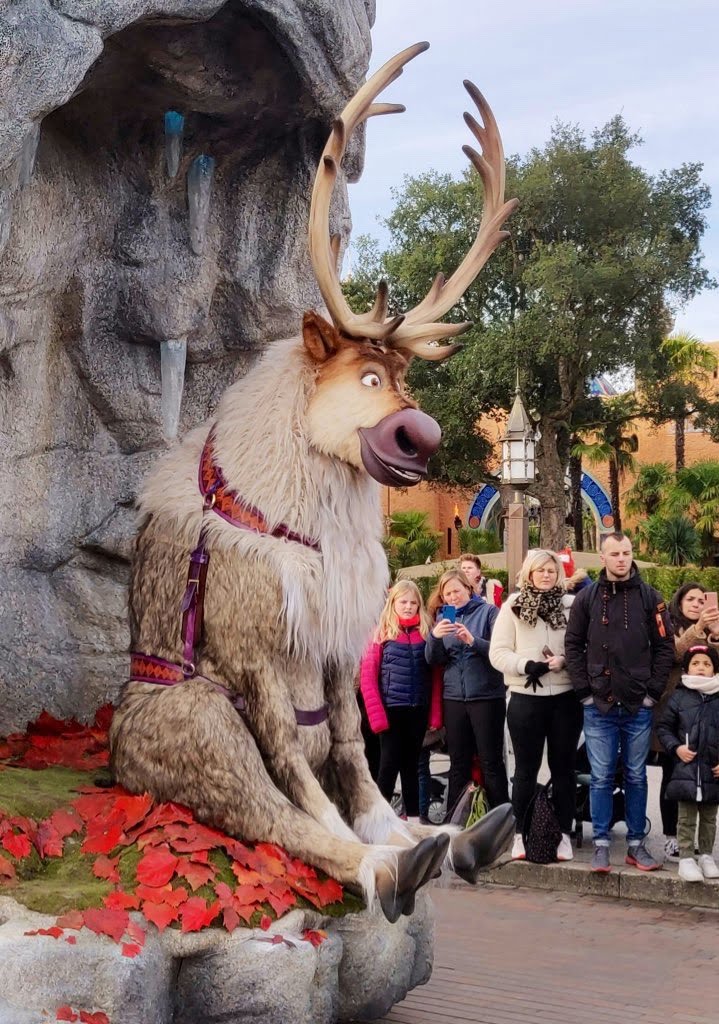 But the real show stopper here is everyone’s favorite smelly reindeer: Sven! Part animatronic/part puppet, Sven is HUGE, makes almost as many facial expressions as in the movie, and bops to music. If you want to enjoy his entire performance, make sure to stand by the right hand side popcorn stand, you won’t regret it!

See him in action HERE! 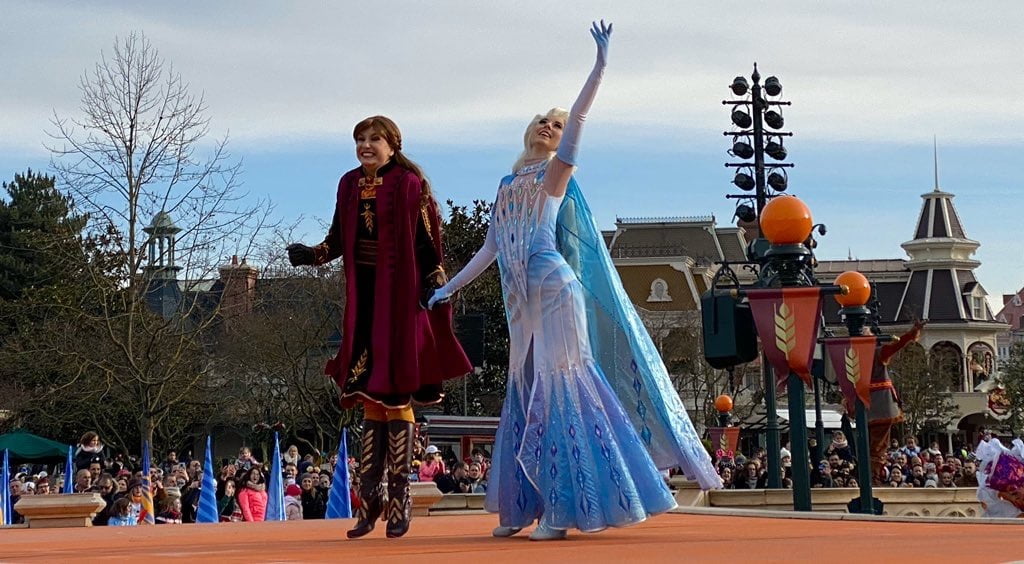 Elsa features a dress unique to the show, inspired by the movie.. with more theatrical features.

Anna is portrayed in her lovely “traveling dress” and Kristoff debuted his Frozen 2 look exclusively in Paris. 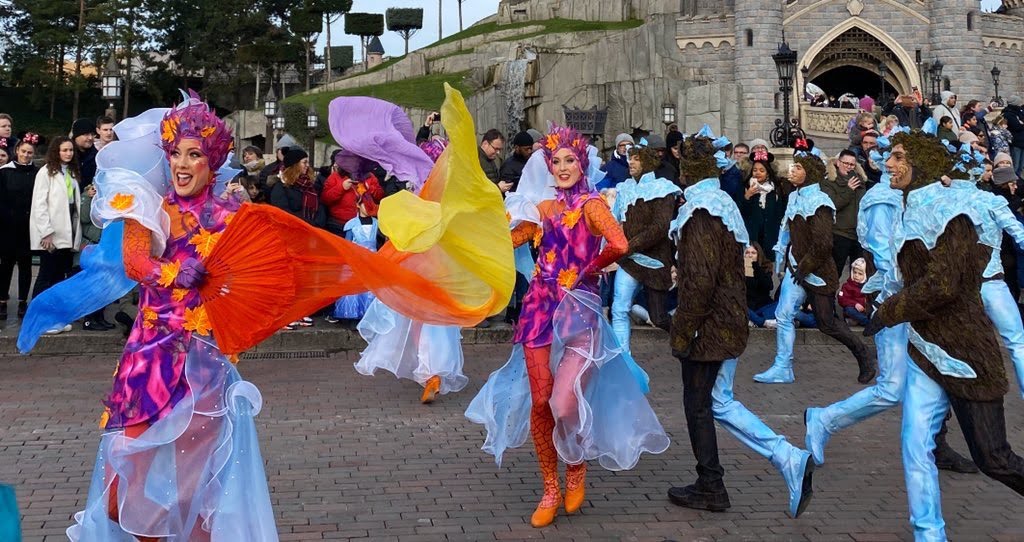 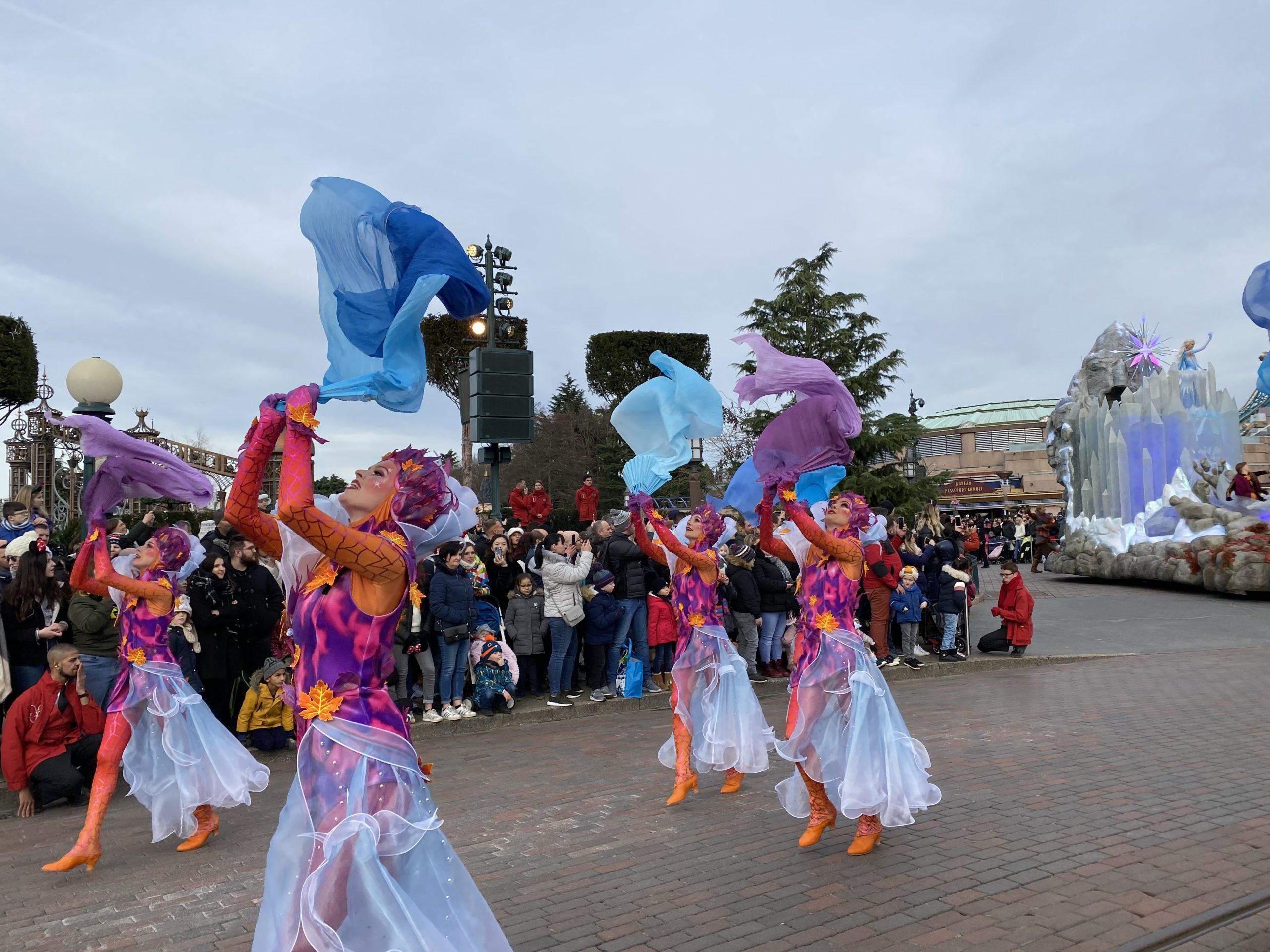 The soundtrack of the show is an English medley of most of the Frozen 2 songs, re-arranged in a “Parade style” soundtrack.

As a result, the performers do not lip-synch to the songs (which can feel a bit old – you can tell Elsa is itching to belt it out). Instead the dancers are actually singing the soundtrack (or rather lip-sync to it). Once you know, it does make more sense! 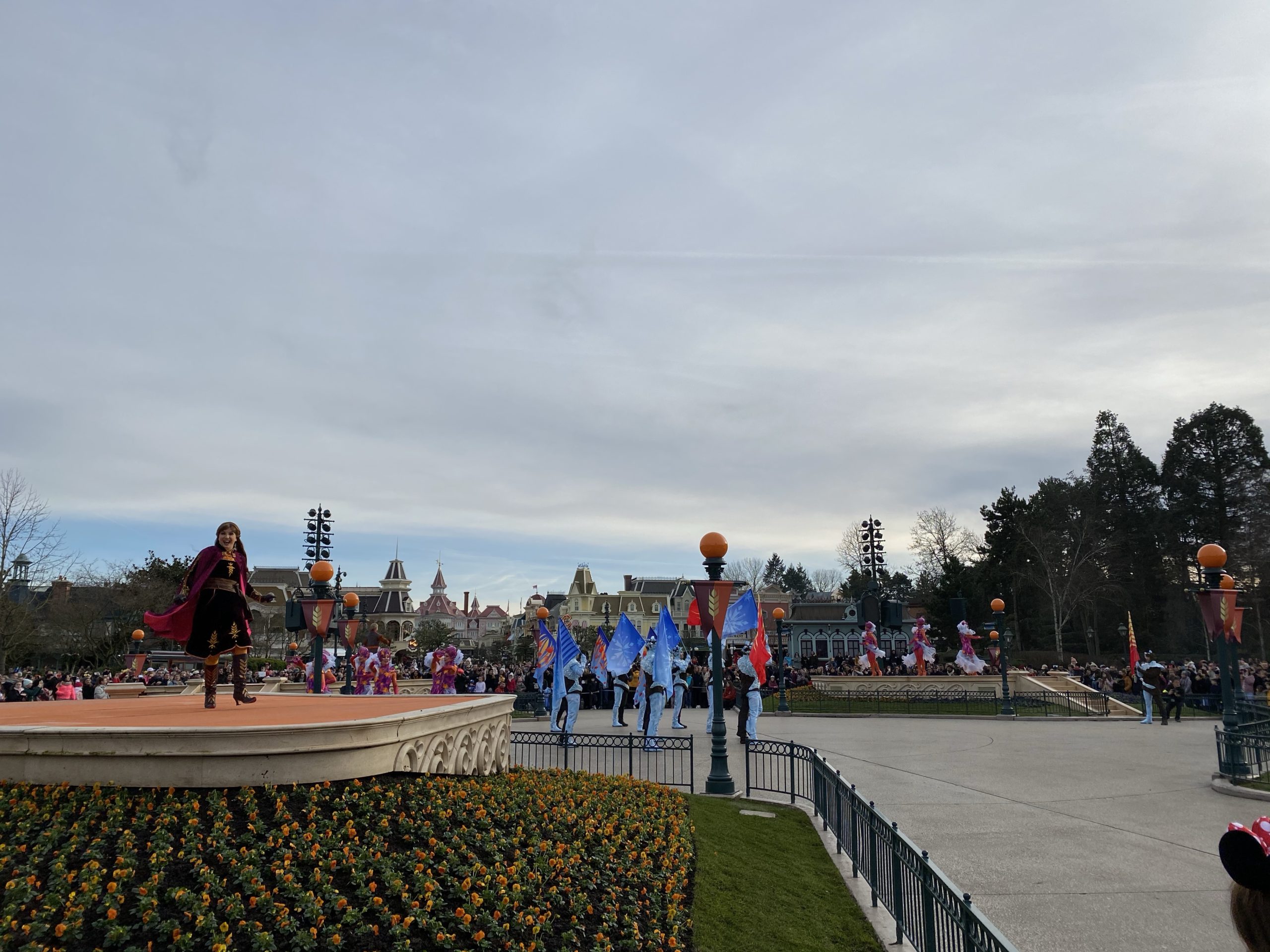 So here we are. The show stop. Characters join the dancers in the center of the Hub for a flag dance and jumping around the four planters stages.

A decision was made to close the center of the hub to Guests. This is a really bad idea for so many reasons.

– Guests standing in the center has always been at the heart of the success of recent Central Plaza shows,

– the road is significantly lower than the center of the hub which ends up hidden by the planters. None of the dancing in the middle (a significant part) is really visible,

– it’s been proven in previews shows that performers can still jump from one stage to another while having Guests in the center,

– having the performance so far away breaks the energy and flow.

Hopefully the issue will soon be addressed so that Guests can truly enjoy the production to its fullest.

In short, the show has some really great ingredients: a fantastic new float, fun music, creative costumes, and talented performers – but they don’t seem to be mixed together just right. Still, the show brings fun to Central Plaza in a formerly entertainment deprived period of the year and celebrates the #1 Animated Movie of all time.

[…] You can read our full review of the production HERE […]