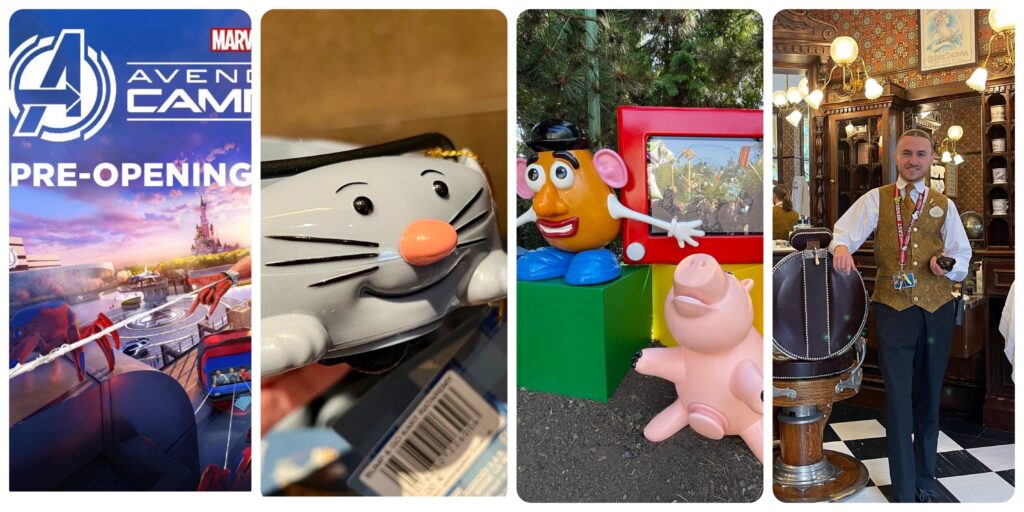 And we are back with a new weekly report! I’ll call this one the calm before the storm. But as the Resort gets ready for the frenzy of the opening of Avengers Campus it’s all hands on deck to make everything sparkle. Let’s take a look!

We’re really close to the finish line at Avengers Campus and it shows as visible construction activity has reduced drastically. The teams are now working on the small details (like netting on the balconies or resizing the PYM logo above). Inside the buildings, the race is on to finish the restaurants on time with Stark Factory already being able to dish out pizzas by PYM Kitchen in a still unknown state of preparedness.

With the land now delivered to the operation team, Avengers Campus Cast Members have been seen on stage, our first look at the costumes since the official reveal. The land is in “test and adjust” mode since July 2 with cast members trying out the attractions and other offerings of the land until July 5.

While of coverage of Avengers Campus will be lighter over the next week due to the lower visible activity, we’re gearing up for the big opening event on Saturday July 9, so stay tuned for our special report across all our media next weekend.

This week the pre opening days were available for reservation. Infinity and Magic+ AP holders were able to book one of 30 slots a day to visit the land between July 16 and 19. The website of course went into meltdown despite the use of a virtual queue, but in the end the event had enough capacity to offer availability well into the later part of the day and even the next.

“The rest” of Walt Disney Studios Park is desperately to look its best and that apparently took the form of the addition of these Toy Story figures across from the Toy Story Playland entrance. They appear to have been savaged from a former parade float. So many question – Why? Why now ? Why here ? But here we are.

Nearby, these tires were repainted – white. Not sure how long they will stay white but it looks nice for now.

But that’s not all – the Earfell Tower also got a nice power wash – at least the ears – and the lighting has been fixed finally.

At the park’s entrance this interesting test of a mobile ticket scanning station was in progress. Maybe for the Avengers Campus opening or other events.

Over at Disneyland Park, the Discoveryland entrance sign has been repaired. It was sadly scratched by guests climbing on it.

In Adventureland Bazaar, a number of potted trees have returned for the summer.

And this popcorn cart has returned near Indiana Jones. It has been gone for a while.

Still in Adventureland, some of the caves under La Cabane des Robinson have closed. This is likely due to the treehouse refurbishment which may sadly take a long time.

A quick stop in Fantasyland where the Alice’s Curious Labyrinth sign has finally returned. It looks great.

In Discoveyland, Arcade Alpha has become a battery pack rental location. There are no longer any free charging stations but the floor plugs are still active.

Over at Hyperspace Mountain, a new interactive kiosk now allows guests to find and retrieve their attraction photo, hopefully cutting down the time it takes to do that.

On Central Plaza, a row of pebbles was added around the stages, likely for safety.

There’s also a new sign for a Photo Spot by Kodak Moments, one of the newest resort wide partnership for innovative photo products.

Over on Main Street, the Dapper Dan’s Hair Cuts barber shop has reopened and welcomes a new barber: Florent ! You can see the details and prices of the services available just above.

And just up the Street, the Gibson Girl Ice Cream Parlor has finally reopened! Good to see.

And in the Resort Hub, work continues on the new Disneyland Paris entrance sign with the addition on the sides (spot the hidden Mickeys!)

The new #DisneylandParis30 book “The Art of Disneyland Paris” will be available on July 5!&’ a variety of shops at the Resort. This 200 page coffee table book features artwork and stories spanning 30 years. It’ll retail for €50.

The Ratatouille ride véhicule toy that debuted at Epcot is finally available in Paris! You’ll find it at Chez Marianne for €15.

And some late additions to the Disney Pride collection as we wrap up Pride Month with these Mickey, Minnie and Stitch plush!

Well there you have it – our up to date look at everything happening this past week at Disneyland Paris.

Join us next weekend for a very special report where we will be taking you to… Avengers Campus !