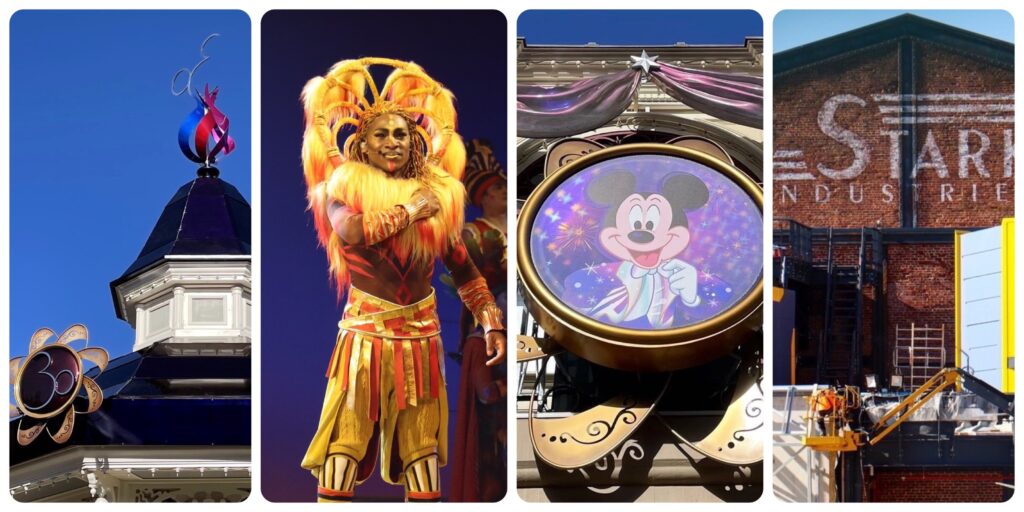 Welcome to our latest Disneyland Paris report! This week, the 30th Anniversary continues to make its way to the Resort, we welcome back Rhythms of the Pride Lands, some noticeable progress at Avengers Campus, Pride news and more. Let’s take a look!

With now just about a week to go, the parks are rushing to get the decorations and other last minute preparations in place. Among them, the smaller Main Street Station character medallions above which also sport the blades of course.

Also added (because more is more): these rotating flames mobiles with 30 logos.

By the end of the week, the big medallion had return and it looks like this is gonna be the Main Street Station look for the months to come: 1 large medallion, 4 smaller medallions, 6 flames, 5 sets of draping pieces with stars, and a whole lot of LED neon.

Moving on to the Main Street lampposts: more medallions ! These are of different color combinations and tend to change colors based on time of day.

The Town Square Gazebo is also being themed for the Anniversary, with a matching design. Here we even have an overlay roof which contains strings of LED for a “pixie dust” effect, show equipment and of course – medallions and a large flame. It’s not complete at the time of this post but drapes and other elements are yet to arrive.

Let’s not forget the “Gardens of Wonder” which are also veeeerryyy sloooooowly being set up. We’re still at the bath bomb stage but more frames, plants and lights have arrived to move along the design.

It looks like each mobile will get some accent lighting amongst the glowing plants, lack lights and other colorful washers.

To accommodate the gardens construction and also future viewing, a number of vending carts have been relocated, some by the Discoveryland entrance, other near Casey’s Corner.

Interestingly, the LED mesh has been removed from the Sleeping Beauty Castle turrets. Technical adjustment or failure of the entire idea, guess we will know soon..

At Disney Village: this massive logo wall will be great for insta photo shoots.

We also got a closer look at the 30th Anniversary souvenir coin, available for €3 at the coin vending machines.

After Disney Jr. Dream Factory last week, this week we welcomed back Rhythms of the Pride Lands after a hiatus of almost 2 months. The show is largely unchanged and as popular as ever.

Note that Frontierland Depot has also reopened as a result and Guests don’t have to do a full tour every time any longer. Fantasyland and Discoveryland station however remain closed.

Some pretty cool noticeable progress this week on the theming at Avengers Campus, starting with this striking blue glass column. You can also see the WEB logo shape where the sign will go. This balcony looks like an awesome spot for Spider-Man to greet guests when they enter the land.

Theming continues to be applies to the entire Spider-Man’s building as well with more paneled and infrastructure.

These large blue and yellow boxes have been added to the building. The right one likely contains the landing net for the Stuntronic. However note that the feature has NOT been confirmed for Paris at this time.

Across the street, the reflective glass facade appears complete at the Super Hero Training Center (meet and greet) where you’ll get to meet Spider-Man and another superhero.

We also got a peek at the former “Cafe des Cascadeurs” diner car from a contractor working on the project. The location is very much still there and will be integrated in Avengers Campus:

Avengers Campus is slated to open this summer, with exact dates yet to be announced.

Let’s start at the Disneyland Park entrance for a change with the Mickey planter which was just replanted in white and pink. Will be lovely when it blooms!

At the Disneyland Hotel, sections of bare concrete unveiled by the removal of the wood planks was painted pink to be less shocking.

The refurbishment is pretty intense. On top of the inside being redesigned and re-imagined, the outside is also getting a lot of elements replaced, like these balcony railings.

Work is also ongoing inside the drop ceiling area on the park side of the building.

In Fantasyland, yep it’s another repaving section ! Look at that pile of pavers. Glorious.

At “it’s a small world” which is dry until the the end the year, a lot of tarps have been temporary removed due to the recent inclement weather.

In Adventureland, the central bridge to Adventure Isle has been closed for refurbishment. This bridge was often slippery and the many efforts to replaced the anti slip coating have had issues.

Looping back onto Central Plaza, scaffolding is finally coming down on the Victoria’s building. Looks like they may try to have it all cleared for the anniversary opening weekend.

And all around Main Street, the brush n’ roll teams are gong their best to give touches of shine to everything in time for the celebrations.

Heading over to Walt Disney Studios Park, lots of drilling activity in the expansion zone beyond Hollywood Blvd – the next big frontier !

Talking about Premier Access & Friends, works are ongoing in the Animagique Theater queue, possibly for a Secure Your Seat access. Mickey and the Magician is expected to return in May.

Disneyland Paris is re-evaluating its face covering policy following the decision by the French government to stop requiring face coverings in public spaces subject to the vaccine pass from Monday February 28.
More information will be released soon.

Direct Eurostar services from London to Disneyland Paris are officially returning starting March 25, 2022.
Direct trains for the Christmas period are also on sale.

The “Mickey – The Main Attraction” Pirates of the Caribbean collection was on sale exclusively for AP holders this week at The Story Book Store. Soon after the opening of the sale all the Loungefly bags were gone (probably to all the resellers).

And that’s our report for this week. Join us back here in a week for a big update where we will take a look at the launch of the Resort ‘a 30