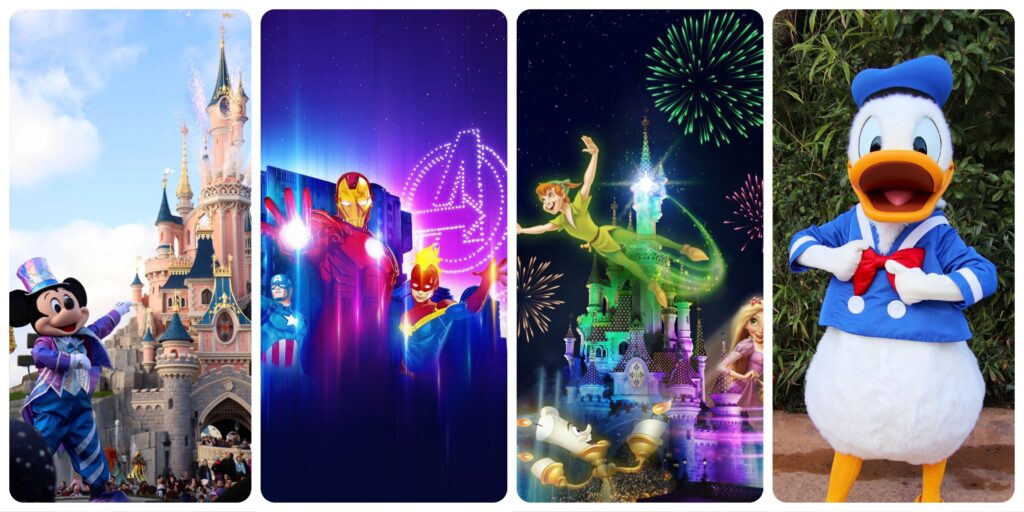 It’s a new week at Disneyland Paris, and the big news is the press release for the Disneyland Paris grand finale season that includes not only the return of iconic show Disney Dreams, but also a new marvel drone show. With the month of January also comes a ton of refurbishment, but also plenty of characters, let’s have a look!

Legendary show Disney Dreams will come back nightly at the resort starting April 12, 2023. The show debut date for the 20th anniversary already over 10 years ago and at the time was really groundbreaking. This time around it will be enhanced by the new LED towers and new laser video projectors. Well, this is great news since as you know, fans are not huge fans of Disney Illuminations and the announcement has been a smash hit online. The timing however, is puzzling. Why this why now? While it will be so great to see this iconic show again, let’s hope this is only a throwback before something new and exciting is announced next year or later.

But that’s not all the resort also announced a surprise brand new marvel drone show on Tower of Terror called “Avengers: Power The Night”which will include pyrotechnics, projections lights, and, of course drones to bring to life the Marvel heroes.

Concept art for the show has been a bit vague but it looks like the show will be creative and innovative. The show starts on January 28, 2023 and will only run until May 8, 2023. The reason for this is likely that Walt Disney Studio Park would need to close later than planned if the show continues into the summer due to the light.

The new Pixar Show “We Belong Together” was also included in the announcement, but not much new information was announced, except that it is still slated to debut in summer 2023 at Studio Theater. While it was announced officially in September 2022 at the D23 Expo, the project remains mostly a big mystery.

Included in the press release was also the fact that ‘it’s a small world’ will reopen in spring 2023 with no more specific date announced.

Merchandise also had a word to say in this press release and announces that a new Minnie Paris collection will be released for Polka Dot day, as well as a gender neutral line of clothing and accessories themed after the hits anniversary show “Dream… and Shine Brighter”. We will also get to buy some new art from Kevin and Jody themed after the 30th anniversary.

Some of the offering for the grand finale has already begun on Monday, and we are of course, talking of the grand return of hit show “Dream… and Shine Brighter” .

The show return mostly unchanged but with a new cast of performers, and Tiana also took the opportunity to debut her brand new dress doing the show.

A big welcome to this new cast, which will for sure continue the tradition of diversity and inclusivity in this production.

In the end, and while 2023 is a bit of a gap year in the slate of upcoming projects for Disneyland Paris, it looks like entertainment will once again save the deal with an exciting lineup of entertainment – from Disney Dreams to the Marvel drones shows, “Dream… and Shine Brighter” and the new Pixar production leading into the usual Halloween and Christmas seasons, which are always popular.

Our first look of the year at the construction on the Walt Disney Studio Park expansion project, a lot has been going on with more structures going vertical at Frozen Land as well as more concrete and equipment for the lake and the shores. There is no definite timeframe for this project to open but it is widely understood that 2024 will be the year of Disneyland hotel and 25 will be the year of the next phase of the Walt Disney Studios Park expansion.

Talking about the Disneyland hotel, a lot of work is still ongoing with over a year to go for the reimagined property to open. Above, we are looking at windows for what used to be Inventions, the buffet restaurant, which is likely to be re-themed to a more royal concept.

It’s hard to say these days if there is still an off-season, but if there would be one, this will be it, and that is the chance for all the smaller sized refurbishment to take place around the lands. This week was also all about Christmas removals, including the food chalets which were this year in Fantasyland for the first time.

One thing that has not been removed yet is the Christmas Tree in town Square – it seems that high winds all this week have prevented the crane from coming in and removing it.

We are even seeing some refurbishment in Central Plaza for the anniversary Gardens of Wonder. Some of the structures had started to discolor due to the sun and winter weather.

Stickers are now covering some of the windows at Constellations, and they are pretty bad.

Hyperpace Mountain was under refurbishment all this week – not much has been done except the repainting of some of the indoor tunnels and lighting that has been updated. It is unclear if the catapult cable has been changed as it was understood it had already been changed in December.

Still in Discoveryland, the temporary toilets have open near Videopolis. They are not very nice but at least they’re only temporary and as some have pointed out online it is I guess better than having not enough toilets in the land.

Over at Walt Disney Studios Park, we said goodbye to Mickey and the Magician until mid Feb a week ago and the teams are taking the chance to do a bit of touchups at the theater.

In Production Courtyard, the equipment is being reinstalled for the next three performances of a limited time nighttime spectacular “Magic over Disney” that will be performed on January 19, 23 and 25 at 7pm.

Not exactly a refurbishment, but let’s include it over here – at Stark Factory, toppings on the €14 pizza have changed – on some of them you will get some added vegetables while others have been switched out. You can see the new menu on the top the third photo.

A lot of activity at Disney Village of course, as of the remodel gets underway. Last week, we said goodbye to Planet Hollywood, and this week things are moving very fast with the removal of the entire signage on the iconic globe facade.

Walls have popped up down the road all the way to King Ludwig’s Castle, which is also starting to get dismantled it will reopen in February as the Royal Pub, an English inspired pub which is understood to be a temporary concept until the location is officially merged into the Disney village remodel.

Let’s keep going down the road and de facto down the list of closures: Disney Fashion Junior, a shop which really had no clear concept for years is going to close at the end of January as it starts being added to the first phase of the Disney Village remodel. This is likely around here that we will get a first look at the new facades that are planned for the entire area.

Things are also moving swiftly at Cafe Mickey, as you can see the extended outdoor terrace has already been removed. Scaffolding is going up on the side of the building, and some of the silver and copper cladding has been removed from the pillars.

There was even already some refurbishment at Disney’s Hotel New York this week as the Bleecker Street lounge closed for a few days and now has reopen with updated lighting and an updated menu with added anniversary drinks.

The glass door of the hotel’s boutique had broken and fallen down into the hallway earlier this week, but has now been fixed.

A long Gallery of character photos for you this week as random character interactions have increased in both parks. This may be the result of having no real big season on at the moment, but hopefully it continues as it really adds a lot to the day.

On Disney Stars on Parade this weekend Captain Hook was riding half of the Peter Pan unit, which made for a bit of a comical situation. It’s unclear what happened to the rest of the float with the moon and swing, but it may have become too unsafe to use in the show. The parade has received absolutely no update with the 30th anniversary, and it is starting to show its age and lagging behind other productions at the Resort.

More information has been released for the next annual pass party on March 10, 2023. As with the New Year’s party they will be no meet and greet but instead a lot of performances and activities in each of the lands that will allow guest to interact with Disney characters. Tickets go on sale online via the annual pass portal on January 18 at 11 AM CET, and you don’t want to miss this deadline as these tickets are sure to be going very very fast.

Breakfast is now available at Casey’s Corner every morning until 11 AM. Apart from the classic formula with a pastry there is also a new sub option which contains eggs and onions. Nice to see a bit of variety and options for breakfast at Disneyland Park.

Talking about breakfast, you will get the chance to have breakfast with the Disney princesses again at Auberge de Cendrillon starting this spring. The exact dates of booking or dining have not yet been revealed.

Thank you for reading, and see you back here next week for more news from Disneyland Paris!