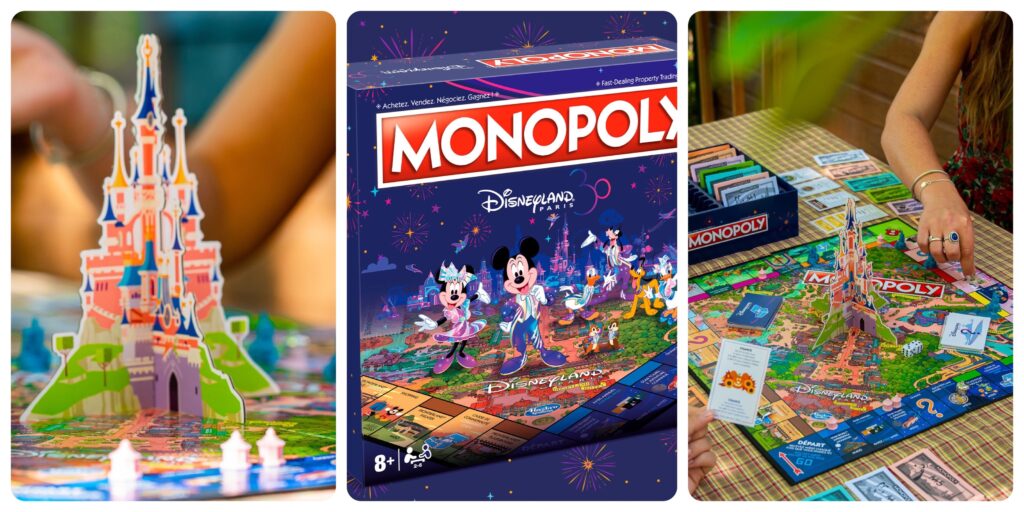 For the 30th Anniversary, Disneyland Paris’ Product Merchandise teams collaborated with the teams in charge of the famous Monopoly board game to offer a version entirely themed to the colors and locations of our destination. Meet Laureen (assistant product manager), Sandy (graphic designer) and Marylene (designer) who are all part of the teams that worked on the development of this project.

Could you describe your career path at Disneyland Paris and what you are currently doing there?

Laureen: I started at Disneyland Paris as a store assistant in Fantasyland and was lucky enough to move up to my current position as assistant product manager.

Sandy: I arrived at Disneyland Paris in April 2012 in the Food team. In addition to an apprenticeship in visual communication, I joined the Art Merchandise team as a graphic designer. My job is to create the products sold at the destination.

Marylene: I joined the Art Merchandise team at Disneyland Paris in 2017. I am in charge, along with the other artists, of drawing our favorite characters so that our guests can find them in our stores.

We know that Monopoly is an iconic board game that has been around for decades. How did you react when you learned that you were going to work on a Disneyland Paris themed version of the famous Monopoly board game?

Laureen: My first thought: « WOW! My second thought: « WOW! Quite a challenge! ». I was happy and honored – and a little anxious – to be involved in such a large project. Most importantly, I was really looking forward to getting started.

Sandy: We were very excited! It’s an opportunity to showcase our Disneyland Park in a popular board game like Monopoly, which is not something you see often. It’s a great opportunity to do this, and we hope players will enjoy it as much as we enjoyed working on it.

Marylene: I was very excited to refresh this historical game by adding storytelling through our attractions and other iconic locations. I have been a fan of our Park since 1992 and have always paid attention to its many details. So, what a great opportunity it was for me to draw icons of our destination that don’t often get the chance to be represented: Dapper Dan’s Hair Cuts, Frontierland Theater or the Arcades for example.

How long did it take to develop this version of Monopoly from the initial discussions to its arrival in stores? What were the key steps and how did the collaboration with the supplier go? Any particular anecdotes?

Laureen: From the time I joined the team until the official announcement of the commercialization of Monopoly, it was a year and a half. My most important milestone was the number of evenings and weekends spent playing six different versions of Monopoly with my family. It helped me master the mechanics of the game and inspire me at the same time. Another step, just as important, is the communication of the specifications to the supplier with the first corrections. These different steps were done under the guidance and advice of the Walt Disney Imagineering team and our management. And finally, the ultimate step is the arrival of the first sample which concretizes the end of the project just before its official announcement and its arrival in stores afterwards.

For the anecdote, I imagined myself in the place of a pawn that was walking through the set as if I were moving through the Park. It’s like discovering it for the first time. I wanted the players and fans to experience it too. In fact, I realized that there was no train station in Adventureland. I found a way to transform the train stations into land entrances with a nod to the stained glass windows of Main Street Station.

How long did the artistic design of this version of Monopoly take in total? What were the key steps?

Sandy: The design of the game took several months, as there were several key steps involved. Between the thinking around the game, the cards and their contents, the illustrations and the realization of the documents and the supplier follow-up. It’s a real team effort, you have no idea how many details are present in this game!

Marylene: Laureen had the great idea of working the edges of the board as a single illustration. So we are not in the usual « 1 square = 1 illustration » scheme. This is certainly what took the most time in terms of drawing, but it is also what makes our version of Monopoly so special! Finding an atmosphere per side, making these four « landscapes » work without losing the nomenclature the player is used to… The other big work was on the « Community Box » and « Luck » cards. They were a lot of fun to make. Depending on the difficulty and the elements already at my disposal I could create 2 to 6 cards per day.

Do you have a favorite square or card in this Disneyland Paris version of Monopoly?

Laureen: My favorite box on the set is « Shopping ». I have always loved shopping at Disneyland Paris. Before I became a Cast Member, I would spend my time in the stores looking for and buying the latest product.

Sandy: Yes, I love the feel of the 4 Lands on the game board immensely, but the 2 squares that particularly resonate with me are Indiana Jonesâ„¢ and the Temple of Peril and Star Warsâ„¢ Hyperspace Mountain. As a little girl, I used to watch the advertisement with this sentence « The greatest attraction in the galaxy is at Disneyland Paris » . These were my first thrill rides and I’m proud of them!

Marylene: It’s very personal because I’m a huge fan of Jules Verne and 20,000 Leagues Under the Sea. So I was delighted that a card was made with the Nautilus Mysteries attraction. I think we are very lucky to have a walkthrough on this theme! The sets are incredibly faithful to the 1954 film. It was an opportunity to remind us that we are lucky to have this exclusive at Disneyland Paris.

The Disneyland Paris Monopoly Game is now available in the Resort shops for €70.