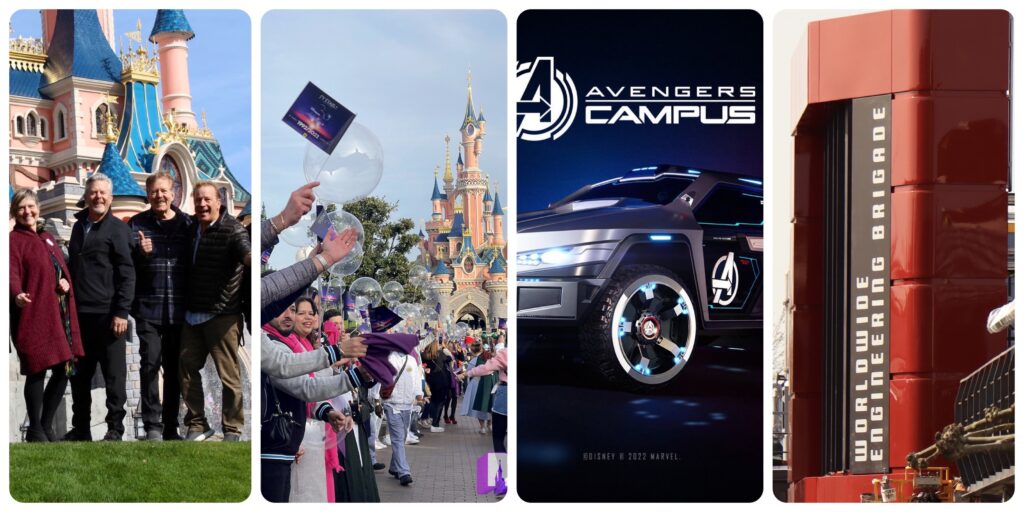 April 12 was of course the anniversary day of the Resort! While no big parade or speech was held, Guests were welcome by excited cast members with flags and balloons. Sometimes it’s not just about the production value but more about genuine excitement and positive energy. This was one of those time and it was wonderful, a really memorable moment!

Upon entering, Guests were gifted a flag and a special souvenir park map which overlayed the original and the current park maps. Clever!

Disneyland Paris President Natacha Rafalski and COO Daniel Delcourt were in the parks welcoming Guests. We got a chance later in the day to exchange with Natacha Rafalski. A selection of Insidears members could any questions, with topic ranging from digital (which remains a priority with a lot of projects and features in the pipeline, for example the ability for Guests to go “straight to park” or straight to room”) to upcoming attractions (the priority remains Walt Disney Studios and other large scale projects like Disney Village, sorry Disneyland Park), and also measures to solve the “merchandise resellers problems” like linking purchases to tickets with updated technology.

Notable merchandise releases on the day included the new reusable shopping bags with the Avengers Campus design, and a special t-shirt.

There was also two celebration magic shots: confetti and balloons.

The big event of the day was also the “30 Years of Disneyland Paris with the Imagineers” conference. For the occasion, an impressive panel of legendary creatives who were involved in the creation and development of the Resorts made the trip to Paris: Tony Baxter, Beth Clapperton, Tim Delaney, Tracy Eck, Björn Heerwagen, Sylvie Massara and Tom Morris, plus moderators David Wilson and Tom Fitzgerald. The group stopped by Castle Hill the day before for a photo.

On the day, Guests and Cast Members gathered in a packed convention center at Disney’s Hotel New York – The Art of Marvel for a fascinating discussion about the design of the Resort, plus ongoing and future project ! You can watch the full conference right here:

Nothing really new was announced except for the unveiling of the new Disneyland Hotel logo. The property is undergoing a “Royal” re-imagining this year and next which we’ve been documenting in recent months.

After the conference, lucky invitees with a magic ticket could meet some of the imagineers for a quick chat and photo.

For the occasion we also met up with the Original Main Street Quartet who was here independently to take part in the celebrations. We walked around the park for a few performances and interview. Check it out below and thanks again to the guys for their time!

April 12 was just lovely. A mix of celebration, look back on the rich (and tumultuous past) but most of all this unique Disneyland Paris energy and excitement for the future.

With an opening date still to be determined (even Disney themselves don’t know yet), we’re not getting a fully fledged press conference but tidbits continue to trickle in to help us wait. The latest was this collection of close ups on the various signs and reference at the Web Sling-R attraction.

From Disney: “Tony Stark is currently putting the finishing touches on the restoration of his father Howard Stark’s old industrial facilities to turn it into Avengers Campus here in Paris. Among the first groups to settle into the Campus is the Worldwide Engineering Brigade, home to the brightest young engineering minds in the world! The facility is covered in vintage graphics left over from Stark’s father’s era, which the kids have decided to preserve as a nod to the past and give the place a uniquely cool atmosphere.”

Later in the week, Disney also unveiled a first look at the “Avengers Deployment Vehicle or “ADV”. Designed by Tony Stark in collaboration with Shuri from Wakanda Design Group, the Avengers Deployment Vehicle will deploy Super Heroes to various key locations throughout Avengers Campus, for them to meet new recruits and jump swiftly into action.” A Paris exclusive, can’t wait to see it drive around Avengers Campus!

On the ground, the sign did the “Worldwide Engineering Brigade” has been installed on the Web Sling-R building. Another cool milestone !

And just across the street, the entrance of PYM Kitchen buffet has made some good progress! Let’s see what they serve here……

We start at Walt Disney Studios Park where the dismantling of the Production Courtyard stage is progressing fast. There is not much left and probably our next article will show it all gone.

As the project advances, the Toilets of Terror have now reopened. Interesting how Avengers Campus gets blended into the toilets and even provide a little extra immersion with the higher wall.

Nearby, the Info Board has returned from refurbishment. Not many changes but probably setting up the screen to welcome additional attractions. The day is almost here !

Over at Disneyland Park, the Castle Courtyard repaving project has made some progress, with walls moving on one side (unveiling another fantastic job) and also in the other side (changing once again the access to the area).

Another ongoing project we talked about above is the Disneyland Hotel re-imagining. It’s fascinating to see most of the work being done with cherry pickers, minimizing the visual impact. Progress is being made on painting, roofs and also under the hotel.

Over at Disney Hotels, customized characters banners matching the theme of each location are welcoming guests to the 30th Anniversary celebrations. They’re pretty well done !

And at Disney Village, posters have been added for Disneyland Paris Pride, the after hours event on June 11. The night will feature exclusive performances, a Pride celebration March, merchandise, snacks, meet and greets, attractions, a lip synch along and more. Tickets are now on sale on the official website.

Talking about Disney Village, works have began around the Disney Events arena. It looks mostly like landscaping but who knows these days!

And talking about Lake Disney, later this month, National Geographic will present a special photo exhibit all around the lake for Earth Month, featuring exceptional landscapes from around the world. The Resort will also produce a preshow to the preshow Disney D Light on April 22 only, and a masterclass with National Geographic explorers, so stay tuned for all that from this new franchise in and around the parks.

The 30th Anniversary BIC 4-color pens have arrived in shop for €15 (3 pens). They’re pretty fun and a throwback if you used to have these at school!

The DLP30 Loungefly bags briefly returned at Flora’s. They of course immediately sold out. The next shipment is expected late May.

And these lovely gold anniversary pins are now on sale. These are open edition so they will hopefully be around for a bit. There is also a lanyard with small charms.

Disney Fashion Jr. at Disney Village has become an Arribas pop up location, featuring a new activity for kids: a reusable draw on glass. The location also features a full on nail art conter, after the success of the test in the park.

Well that’s all roundup of all the news from this anniversary week! It’s really been great with celebrations, news, and a positive atmosphere at the Resort. I will see you next week for more news from Disneyland Paris!