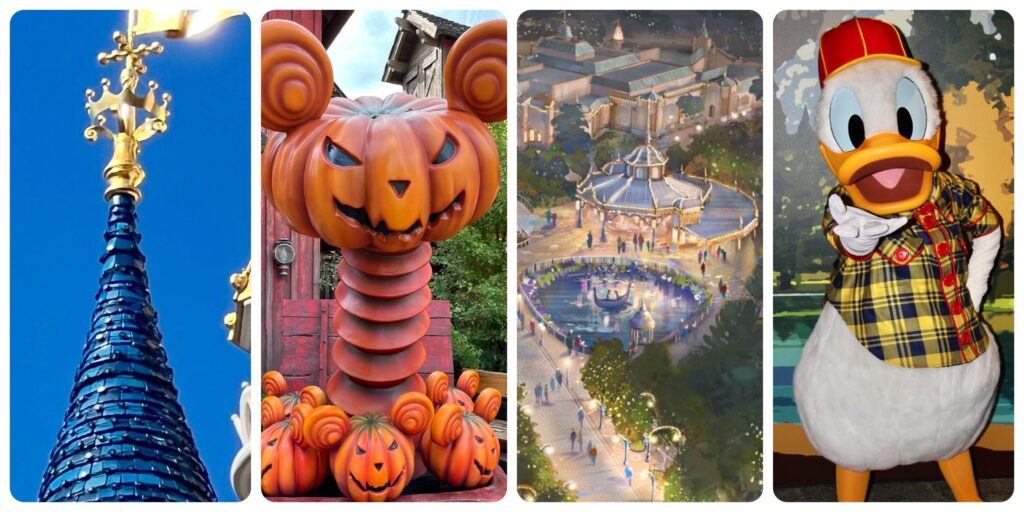 Hello and welcome back to the DLP Report! As you may have noticed we took a break the last couple weeks as we recover from the D23 Expo, and a bit of holiday time! We’ve got a huge update as a result: we’ll have a look at the key announcements for Disneyland Paris at the D23 Expo, and back home the arrival of Halloween, Christmas, the latest news and construction updates. Let’s go!

We had the chance to attend the D23 Expo once more and it’s always such a treat. Beyond the excitement of the news, the expo is also the occasion to exchange with fans from all around the world, and hear from the people behind the magic in ways that are just not possible online. If you’re thinking about going next time, do it – it’s exhausting but worth it.

For this recap we’ll focus on the Sunday Panel by Disney Parks President Josh D’Amaro and more particularly the Disneyland Paris News. We invite you to search our feed for #D23Expo for all the other announcements from around the divisions and the world.

If you love “Dream… and Shine Brighter” you’ll be happy to learn that the #DisneylandParis30 offering has been extended to September 30, 2023. This means shows, characters and decorations.

The big wow moment was this new concept art of the “Avenue” as part of the Walt Disney Studios Park expansion. No we’re not seeing the lake, World of Frozen or any mystical third land just yet because these project are so far away from opening that they’ll likely be covered in the next Expo in 2024 or 2025. This concept however is still very interesting and shows the new Toy Story Playland entrance, the “English Gardens” and the rumored Tangled attraction which will take Guests for a spin aboard the famous boat under a sky of lanterns. The Avenue itself has a very Parisian feel in the style of “Jardins des Tuileries”, à clear departure from both the “Studios” and the “Hollywood” theme.

Both the Toy Story Entrance and the gardens got a more specific concept art and you can see in one that Jessie and Woody will welcome Guests on that side of the Land while statues and a kiosk reminiscent of Mary Poppins will entertain Guests in the English Gardens. A still very elusive part of the Park – it will be interesting to see how all these themes, IP’s and designs fit together.

Taking a closer look at the Tangled show building we can see that it will match in style the new lake side restaurant juste across, so there should be some level of consistency accros the area at least. While it’s important to have attractions for the little ones at Walt Disney Studios Park this cute little ride won’t have a huge capacity and remains a minor addition.

Staying at Walt Disney Studios Park, a new Pixar show “We Belong Together” was announced for Spring or Summer 2023 at Studio Theater (don’t worry, Mickey and the Magician is staying). Little is known about the show except that clearly it will have a Monsters Inc. scene. Disneyland Paris has a decent track record for shows so let’s hope for a hit. Guests were quick to point out that a Pixar show should’ve been placed at Animagique because it’s in Worlds of Pixar but I guess moving Mickey and the Magician is expensive and let’s face it everyone has given up even trying to understand what Worlds of Pixar even is.

There was some Frozen new but not in the way everyone thought – we got a look at a Frozen suite at the Disneyland Hotel which it has been announced will be reopening in its new “Royal” incarnation in Spring 2024. The design is very Disney Hotels as of late: a mix of theming and modern. It’s always a gamble so let’s wait for the final result. I had a chance to stay at Aulani which mixes Disney touches, Hawaiian art and modern accommodations very well, proving that it IS doable.

And that was the news for Disneyland Paris. As always, D23 Expo isn’t a prime announcement spit for the European Resort as a lot of announcements are reserved for the local teams or need to be timed differently. Yet, it was nice to get a new glimpse into ongoing project and I think this was a nice “while you wait” drop of information. Thank you again to the teams at D23, Disney Parks and Disney Branded Television for having us at this year’s expo!

Halloween is Creeping Up

It’s so fine in the fall… summer is over and it’s already almost spooky time with 1 week to go until the Halloween celebrations! The garlands arrived over Main Street so that’s your sign that we’re almost there.

As per usual Frontierland is the first to unveil the decorations and it’s mostly a return of the previous themes here with a few repainting and updating: creepy scarecrows in the back, Dia De Los Muertos in the center, and Pumpkin Men & Women in the front.

We also see the return of Dante and the “Coco” themed decorations at Fuente Del Oro, as well as the large arch and the colorful lights!

On Castle Stage, the Magic Mirror and the set for the Disney Villains Meet and Play is been partially installed. Note that there is no full show, the Villains will make a grand entrance and then meet Guests.

Other character locations are also getting ready like the traditional Costume Corner near Casey’s Corner.

In recent days some of the Disney Villains also came by for a little taste of mischief before the season starts.

Halloween is also about merchandise and it’s nice to see that we’ve got a lot more than a few years ago. From mugs to costumes, clothing, treats, even LED lights, you can find a ton of stuff at the Mercantile Building in Frontierland and other shops around Disneyland Park.

Moving on to food and beverages – lots to choose from and again this is an improvement in years ago even if it’s still not at the level of the US parks. The highlights are the Wanda cocktail at Disney Hotel New York – The Art of Marvel and some of the new snacks that look pretty fun like the Cocoa Puffs treats or the waffle on a stick (will there actually be a stick??). We shall be trying all of these when the season starts.

Halloween is also at the Disney Hotels this what ! With notably some fun decor at Disney Newport Bay Club and Disney Hotel Santa Fe !

A poster in the Fantasia Gardens advertises the season. It’s all gettin closer!

News has also been released about the entertainment content of the Disneyland Paris Halloween parties on Oct 29 and 31:

The Disneyland Paris Halloween Festival starts October 1 and we will have a lot lord news in the coming week as well as the season launch recap next weekend!

A lot has been happening discreetly on Sleeping Beauty Castle to prepare for the Christmas season. The LED mesh lights that were tested earlier this year are back and they’ll be used for Disney D-Light and Christmas entertainment. Another Disneyland Paris innovation that is already in testing at night and will continue to be calibrated for the shows through October.

Of course just like Halloween and maybe even more – merchandise is at the heart of the Christmas season and it has started to arrive in shops with some new and returning items !

Disney Sequoia Lodge has debuted brand new outfits and a new background inspired by the National Parks ! The latest hôtel to overhaul and retheme its meet and greet offering – and we love it. We’ve seen Goofy and Donald but max will also soon join the gang for a camping trip!

Visible progress is being made on the site of the Walt Disney Studios Park expansion including the lake, bridge to World of Frozen, the Avenue discussed above and of course the Frozen attraction show building.

Progress is also being made on the site of the new security gates with paving already finished and foundations ready to welcome the third piece of the puzzle.

Nearby, the bridge near Earl of Sandwich has reopened form a “structural refurbishment” – if you know you now. Looks nice!

Nothing to report at the site of Rosalia Brasserie (formerly Cafe Mickey). The location is supposed to open under the new concept in 2023 soooo..

In the Parks, it’s a small world is the big project to follow right now. Scaffolding and tarps are cling down but the attraction is not expecting to reopens just yet. We’re hoping for the end of the year.

“Themed” barriers are now preventing guests from going on the Central Plaza stages during the parade and night hint shows.

Disneyland Paris has partnered with Uber for some custom made Avengers Campus themed cars and their really cool!

We got to try them in central Paris thanks to Disneyland Paris and Uber and got a LOT of attention on the streets !

Planet Hollywood at Disney Village has released a line of farewell merchandise. The locations closed forever in January 7 as part of the Disney Village remodel.

A few weeks ago I got the chance to visit Disney Aulani in Hawaii and just wanted to thank the entire cast for a wonderful time. It’s complicated to get to from Europe but if you ever get the chance I can guarantee you will love it. A truly magical place !

Well that’s our massive “back to school” news and photo update ! Lots to come in the next editions with the start of Halloween which we will cover next weekend ! Until then, have a magical week!