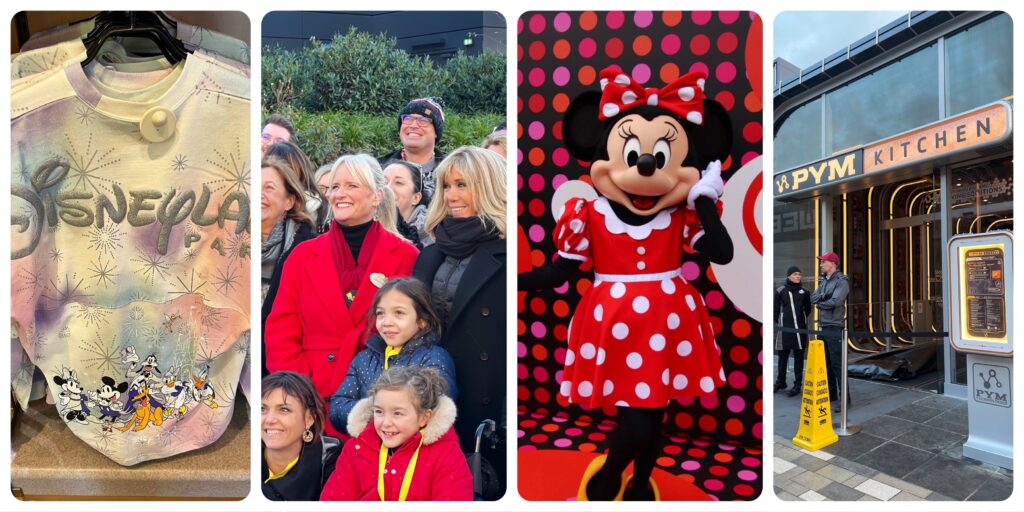 Welcome back to a new DLP Report! This week, we had a lots of merchandise news to talk about but we also spent a wonderful day with the Disney VoluntEARS, enjoyed some “Magic Over Disney” and celebrated Polka Dot Day with Minnie. Let’s take a look.!

Merchandising takes the lead of the Report this week with the arrival of the D100 collection, some new collectibles, the new Minnie Paris collection, and more.

As part of the new D100 collection we saw the arrival of our brand new Disneyland Paris spirit jersey that has been very popular on Twitter.

The resort is also finally stocking a lot of the items that we have seen online or at other Resorts, including Loungefly bags, headbands, plush, jackets, T-shirts, mugs, and more.

As we also celebrate Lunar New Year this week, a selection of Mickey and Minnie plush was available at the Storybook Store.

Across the square at ribbons and bows you can find a new Tinker Bell loungefly bag.

This week was also the release of the wonderful collectible inspired by The Visionarium, designed by Kevin and Jody, which you can now find at Harrington’s and the Disney Gallery.

On Sunday, we were invited by the Disneyland Paris merchandise team for a special reveal event as Disney fashion for the new collection “Minnie Paris”.

The collection includes a wide array of girly girl items from dresses to T-shirts, a watch, bags, mugs, and even sneakers.

You can find the collection now at Disney Fashion and several shops around the resort. It was designed in house by the Disneyland Paris teams.

And we’re staying with Mimi for the section as we celebrated Polka Dot Day on Sunday. Minnie planned a whole day of fun, including a cavalcade several times during the day at Walt Disney Studios Park.

Guests also got the chance to meet Minnie with a brand new backdrop in Front Lot – although this happening had to be delayed in the morning due to very cold temperatures. There was also two special snacks for the day although they did look a lot like the usual snacks with a little bow on top, but are we really surprised with the food team. A new collectible card was also available.

These smaller day-celebrations are always a great addition to the schedule and it’s great to see that the Resort continues to produce them to make the life of the parks a little extra from time to time.

On Wednesday, we were invited to join the Disney VoluntEARSto help welcome hospitalized children and their families for a magical day in the park.

It was wonderful to meet the families as well as the VoluntEARS Cast Members that took part in this programme which Disneyland Paris has been supporting for 30 years.

Disneyland Paris President Natasha Rafalski was of course on hand to welcome the families and children, as well as French first lady Brigitte Macron, and former footballer Didier Deschamps. A big thank you to the VolintEARS teams for welcoming us and congratulations on another successful year!

The running joke for the past few weeks is that the Christmas Tree was still up! It was finally removed on Friday. There are a lot of reasons why it has stuck around, mostly related to strong winds, and the availability of the team and the crane.

Some of the Disneyland Paris 30 Gardens of Wonder mobiles have returned to Central Plaza after a nice little refurbishment, which brought back a bit of color to the washed out structures.

Someone thought it was a great idea to add some shells to the flowerbeds in Central Plaza. From experience, a lot of Guests tend to pick these up and sometimes even throw them in fountains so let’s see what happens to those.

You don’t often see a lot of changes in the Arcades, but this week a new tactile paving was installed on the floor around the Arribas stand. It’s a great feature to help visually-impaired guests navigate the area.

Over in Fantasyland, Le Pays des Contes de Fées is closed for refurbishment‘s and teams are working on the canals. Sadly, it looks like the big washed out book is not going to be repainted at this time.

Works continue at Bella Notte on the construction of the new dining room, which is formerly Fantasia Gelati, and it will be themed to Pixar‘s Luca.

Moving over to Adventureland the refurbishment around Cool Post continues – is more in depth than anticipated and that is always nice to see.

At Walt Disney Studios Park we saw the return of all the equipment for a Magic Over Disney, the limited time nighttime spectacular.

We have a brand new YouTube video of this week’s performance, which do you can check out right above this text.

At Avengers Campus, the Marvel glass door curse strikes again: first, it was the doors at Stark Factory that were under refurbishment and re-opened later this week – but then one of the glass doors at PYM Kitchen broke once again later in the week.

Over at Cars Road Trip, the attraction is closed until the end of the month and as a result, the entire new area has been closed as well.

We also took a look at the Walt Disney Studios expansion project construction: as you can see a ton of activity is going on at the future World of Frozen, as well as for the construction of the Studios Lake. At the forefront, some activity is also going on for the creation of the lakeside restaurant.

Closer to Toy Story Playland, not a ton of activity on the future “Avenue”, but that tree is still protected and will likely be part of the new entrance to the land.

Let’s not forget another major construction project at the moment: the Disneyland Hotel. Crews are still working hard all day on renewing the roofs and repainting the façade as the hotel rushes towards its reopening date of 2024.

Over at Disney Village, the main activity is at King Ludwig‘s and Cafe Mickey, and both locations are receiving some scaffolding, tarps and works are so far moving along nicely.

Of course, while King Ludwig’s is simply receiving a bit of a makeover and reopens next month as The Royal Pub, Café, Mickey will undergo a much deeper transformation and reopen as Rosalie towards the end of the year.

We also saw some activity in the Resort Hub near the new security gates this week – that is because a new gate has been reinstalled in order to close the entire area between the parks and the security check points. This will allow the security teams to close this area after hours, except for the Disneyland Hotel Guests who will be allowed to reach the hotel at night after a wild night at Disney Village.

And that’s our report for this week. Thank you for reading and as always if you enjoy this report please share with your friends. I will see you back here next week with a new check on everything happening at Disneyland, Paris!